Skip to content
About Chinese New Year 2020: Year of the Rat

How long is the Chinese New Year holiday?

The legal holiday is seven days long, from the Lunar New Year’s Eve to the sixth day of the first lunar month. This year’s festival lasts until February 8th.

As an official public holiday, Chinese people can get seven days’ absence from work (January 24th to 30th). Some companies and public institutions take a longer holiday, up to 10 days or more, based on the festival lasting from the Lunar New Year’s Eve to the 15th day of the first lunar month (the Lantern Festival – on February 8th in 2020). According to old folk customs, the traditional celebration starts even earlier – from the 23rd day of the twelfth lunar month. 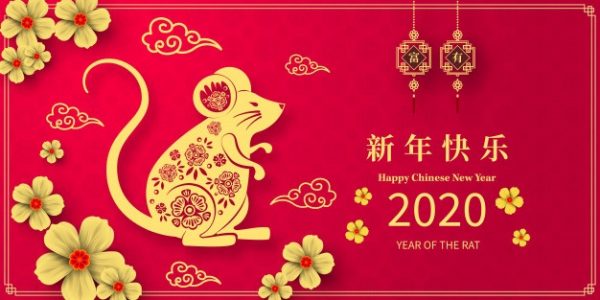 Why do Chinese New Year dates change every year?

Chinese New Year dates vary slightly between years as the festival is based on the Chinese Lunar Calendar, which is associated with the movement of the moon. It is generally held during the period from January 21st to February 20th in the Gregorian calendar. The moon also defines other traditional festivals such as the Lantern Festival, Dragon Boat Festival, and Mid-Autumn Day.

The lunar calendar is associated with twelve animal signs in the Chinese zodiac. Every 12 years is regarded as a cycle. 2020 is Year of the Rat, while 2021 is Year of the Ox.

Flowers are an important part of New Year decorations. Writings that refer to good luck are often seen in homes and business environments and are usually written by brush on a diamond-shaped piece of red paper. Tangerines and oranges are also displayed in many homes and stores as a sign of luck and wealth.

Envelopes with money (Hong Bao, Ang Pao, or Lai See) often come in the color red, which symbolizes happiness, good luck, success and good fortune. These envelopes are mainly given as presents to children. Each Chinese New Year is associated with an animal name for one of 12 animals in the Chinese zodiac.

Year of the Rat

The Rat is the first of all zodiac animals. According to legend, the Jade Emperor announced the order would be decided by the order in which they arrived to his party. The Rat became first by tricking the Ox into giving him a ride, then jumping down and landing ahead of Ox just as they arrived at the finish line.

The Rat is also associated with the Earthly Branch (地支—dì zhī) Zi (子) and the midnight hours. In terms of yin and yang (阴阳—yīn yáng), the Rat is yang and represents the beginning of a new day. Paired with the Celestial Stems (天干—Tiān gān), there is a 60-year calendrical cycle. Although zi is associated with water, the years also cycle through the five elements of nature (五行—wǔ xíng).

In Chinese culture, rats were seen as a sign of wealth and surplus. Because of their reproduction rate, married couples also prayed to them for children.

Rats are clever, quick thinkers; successful, but content with living a quiet and peaceful life.

Optimistic and energetic, people born in the Rat year are likable by all. They are sensitive to other’s emotions but are stubborn with your opinion. Their personality is kind, but due to weak communication skills, their words may seem impolite and rude.

On the financial side, they like saving and can be stingy. However, their love for hoarding will sometimes cause them to waste money on unnecessary things.

2020 Rats (with element of metal) tend to be reliable and live a stable life. They may hold some power and are able to turn unlucky events into fortune.

About the Author: Bill Lang

Bill Lang is a business educator, coach and adviser across a range of industries and countries. An MBA from Harvard Business School laid the foundation for a 30-year career devoted to helping business owners, leaders and team members build skills and implement strategies to achieve incredible results. Most recently, Bill has focused on helping businesses capitalise on the growing opportunities presented by Chinese customers at home and abroad.